The Village of Romeoville is a southwestern suburb of Chicago that is located on the Des Plaines River in the northeastern part of Will County. The first non-Native American men to travel through the Romeoville area were probably Jesuit missionary Father Jacques Marquette and the French geographer Louis Jolliet, who explored the region in 1673.

In 1816, Congress decided to construct the Illinois and Michigan Shipping Canal, which would connect Lake Michigan and the Illinois River. To begin the project and to facilitate greater settlement of the area, a strip of land 20 miles wide, including the Des Plaines River, was acquired from the Native Americans.

Romeoville was one of the last of the Illinois areas to be occupied by Native Americans. In 1830, during President Jackson's administration, the Indian Removal Act became law. Over the next four or five years, Native American villages were removed and new towns were laid out along the course of the proposed canal. Supplies and laborers were brought in from Fort Dearborn.

By state law, the canal's board of commissioners were empowered to set the route of the canal and to lay out the land on each side in tracts and town lots. One town planned by the commissioners was Romeo, named in honor of the Shakespearean hero. The plat of Romeo was recorded on September 14, 1835 in the Cook County Court House (Will County would form four months later.). In 1835, the commission sold land for $1.25 per acre and one year later, it sold for $200 per acre. Ground for the canal was finally broken on July 4, 1836 in Bridgeport.

1837 saw two new towns, Lockport and Juliet, spring up around Romeo. When the depression of 1837 hit, it greatly hurt canal land sales and growth slowed. At this point, most of Romeo's inhabitants were transient canal construction workers, a majority of which were Irish immigrants. 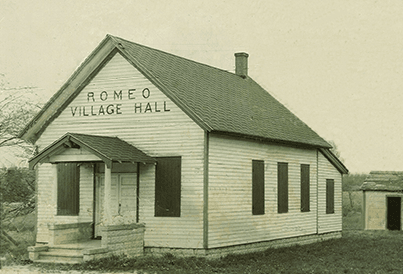 1895 was an important year for Romeo’s government. On January 19, residents of Romeo voted 42 to 20 for incorporation at John Miller's Barber Shop and to change the name of the town to Romeoville. Two days later, Romeoville was officially proclaimed as a village. On February 16, Louis Hamann was elected the first President of the Romeoville Board of Trustees. The first village hall was also built in that year. Besides government business, it served as a meeting room, space for dances and parties, and a jail (there was one cell).

Although Romeoville was once economically dependent on nearby agriculture and dairy farms, the village prospered from its adjacent stone quarries. In 1916, Romeoville gained importance again when it became the distribution point for pulverized limestone, which farmers used to combat alkali spots on their land. The bustling quarry industry supplied the basic materials for early road construction and buildings in such large quantities that, even before Joliet, Romeoville acquired the nickname "Stone City." One of the most famous buildings constructed with Romeoville limestone is the Illinois State Capitol Building in Springfield. The coming of concrete as a building material, however, spelled the decline of quarrying and Romeoville's importance was greatly diminished. The quarries didn’t just serve the purposes of mining though. One of the quarries was filled with water and became known as Romeo Beach, attracting visitors from as far away as Chicago.

Gleaners Hall on Naperville Road & Illinois Route 53 was built in 1922 and became the center of Romeoville community life for many years. In 1963 the hall was burned down in a controlled practice by local fire departments to make way for a subdivision of modern homes.

1922 saw the construction of the Lemont Refinery, supplying both construction and then refinery jobs that boosted Romeoville’s economy. A $200 million expansion of the facility around 1965 was called “the greatest thing to happen to our village,” by then Village President Neal Murphy.

The population of Romeoville in 1929 was 200 people and approximately 46 homes. This was also the year Neil Murphy was elected President of the Romeoville Board of Trustees, a position he would retain for 40 consecutive years before retiring in 1969.

Digging again occurred in Romeoville in the early 1930s when the Chicago Drainage Canal was deepened. Following the project, it was renamed the Chicago Sanitary and Ship Canal. Also occurring in the early 30s was the opening of Holy Name Technical School, an institution that would later become known as Lewis University.

Lacking new industries, Romeoville's population gradually declined during the first half of the twentieth century. Records show only ten telephone subscribers in the village in 1935. Census figures show 180 residents in 1939; 170 residents in 1940; and 147 residents in 1950.

Romeoville entered a new era in 1957 when over six hundred acres of farmland on Illinois Highway 66A (Route 53) became the Hampton Park subdivision. The prefabricated houses, which sold for around $13,000, were first constructed on Fenton Avenue and arrived on trucks. Doors and windows were preinstalled and tile or carpet was already attached to the floor. Cranes would unload the pieces and workers built ten homes in a day.

In the face of this rapid expansion, the Village Board created the Public Works Department on November 5, 1958 to oversee and maintain the new and existing infrastructure of the growing community.  In April of 1960, a group met at the old Romeoville village hall to form the Romeoville Volunteer Fire Department. Four months later, the newly organized department took delivery of its first fire engine. 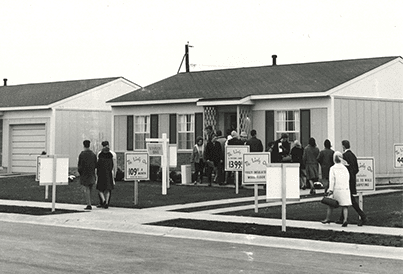 Village hall moved into the Hampton Park neighborhood in 1960. The new building, donated by Alexander Construction Company, housed Village staff in addition to the police and fire departments. The Parks and Recreation Department was established in 1965 and also found a home in village hall: the basement. Two annex buildings were constructed later for additional departments.

The 1970s saw a branching out of Village departments into their own homes.  A standalone fire station was built across the street from village hall in 1975. In 1978, the police moved into a new building parallel to village hall and a stand alone recreation center was built along 135th Street.

On October 25, 1990, Romeoville’s interchange on I-55 was opened. For the first time, residents would have direct access to the expressway via Weber Road.

Community growth prompted the Fire Department to construct two additional stations to protect the businesses and residents of Romeoville. Fire Station 2 (Marquette Business Park) was built in 1991 and Fire Station 3 (Normantown & Birch Lane) was constructed in 2008.

The recreation center was renovated and re-opened on January 11, 2002, featuring a fitness center, classrooms, and an area for seniors, in addition to basketball courts and an area for gymnastics.

In 2010, the village administration moved into a new village hall with a connected police station. The complex sits along 135th Street, east of Weber Road.

The Romeoville Athletic & Event Center was opened in 2014 in an area dubbed Uptown Square, a 40 acre parcel of land sitting southwest of Normantown Road and Route 53 that underwent drastic redevelopment. First built in 1964 and called Hampton Park Terrace, this area saw much of its retail development migrate westward to space along Weber Road. The village purchased 10 of these acres in 2008 and proceeded to demolished buildings, conduct environmental cleanup, realign and rebuild roads, and build new structures. The first of these was the Romeoville Athletic & Event Center. It drew regional attention with an estimated 400,000 visitors annually. New buildings for restaurants and shopping followed in 2017. In 2021, an expansion to the Athletic & Event Center was completed, featuring additional basketball/volleyball courts.

On November 14, 2022, a major renovating of the I-55/Weber Road interchange and the widening of Weber Road was officially completed. Re-organized into a diverging diamond setup, traffic flow was greatly improved. Another major infrastructure project that was officially completed on that cold November day was the eight-story air traffic control tower at the Lewis University Airport.  If Romeoville history interests you, be sure to stop by the Romeoville Historical Society at 14 Belmont Drive. The James P. Sczepaniak Museum is open Tuesdays from 6:00 p.m. - 8:00 p.m., Wednesdays from 1:00 p.m. - 4:00 p.m., the third Saturday of each month from 1:00 p.m. - 4:00 p.m., and by appointment. You can visit them at www.romeohistory.org/ or call them at 815-552-9080.